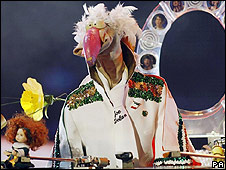 Dustin the Turkey has entered the Eurovision Song Contest. If you’re not from Europe, you won’t fully grasp the notion of the Eurovision Song contest. It’s a song contest, held once a year across Europe, simulcast live. Most nations (with the budget) will have a song entry and the goal presumably is to see who’s the best singer and song writing country. Of course most countries will enter in their native language and represent their country’s heritage somehow, so it’s a great cultural swap-meet.

Europeans sit glued to the television for hours on end whilst the entries perform and scores are read out by each and every country for each and every entry (bar their own).  As a kid we used to make up score-charts, copying every entry from the newspaper onto a piece of cardboard. Oh how we’d agonize on the "matrix" and usually, we’d screw it up at least once.

Ireland’s won it an inordinate number of times, most famously with Dana’s "All Kinds of Everything" but for me it’ll always be Johnny Logan with the melancholy tune "What’s Another Year?". That song is emblazoned on the far reaches of my mind from hours of repeat play on TV and Radio at a key point in my early development.

This year’s entry is from Dustin the Turkey. Dustin is a hand puppet with a Dublin accent. It’s a long journey to Eurovision success but as Dustin would say "Rome wasn’t made out of hay". [LINK]